After taking a trip to Spain to help the animals, our second trip of 2016 took us to Budapest in Hungary. It was a city that neither Liv or I had been to before but a place we had wanted to travel to after both visiting Croatia last year.

We’re practically in spitting distance of Heathrow, (I can hear the planes overhead as I write this) but in the interest of cheap flights, we flew from Gatwick.

As it was Easter Sunday, public transport to the airport was a bit of  a myth. So after a minicab and two extended train journeys, we finally arrived there in the early hours of the morning. We bought a new camera in the airport so were able to take some good quality photos.

Easyjet delays meant that we missed about two hours of the first day in the city but we didn’t let that spoil anything. When we eventually touched down in Budapest, having only hand luggage meant we were quickly on our way from the airport and headed towards our apartment. 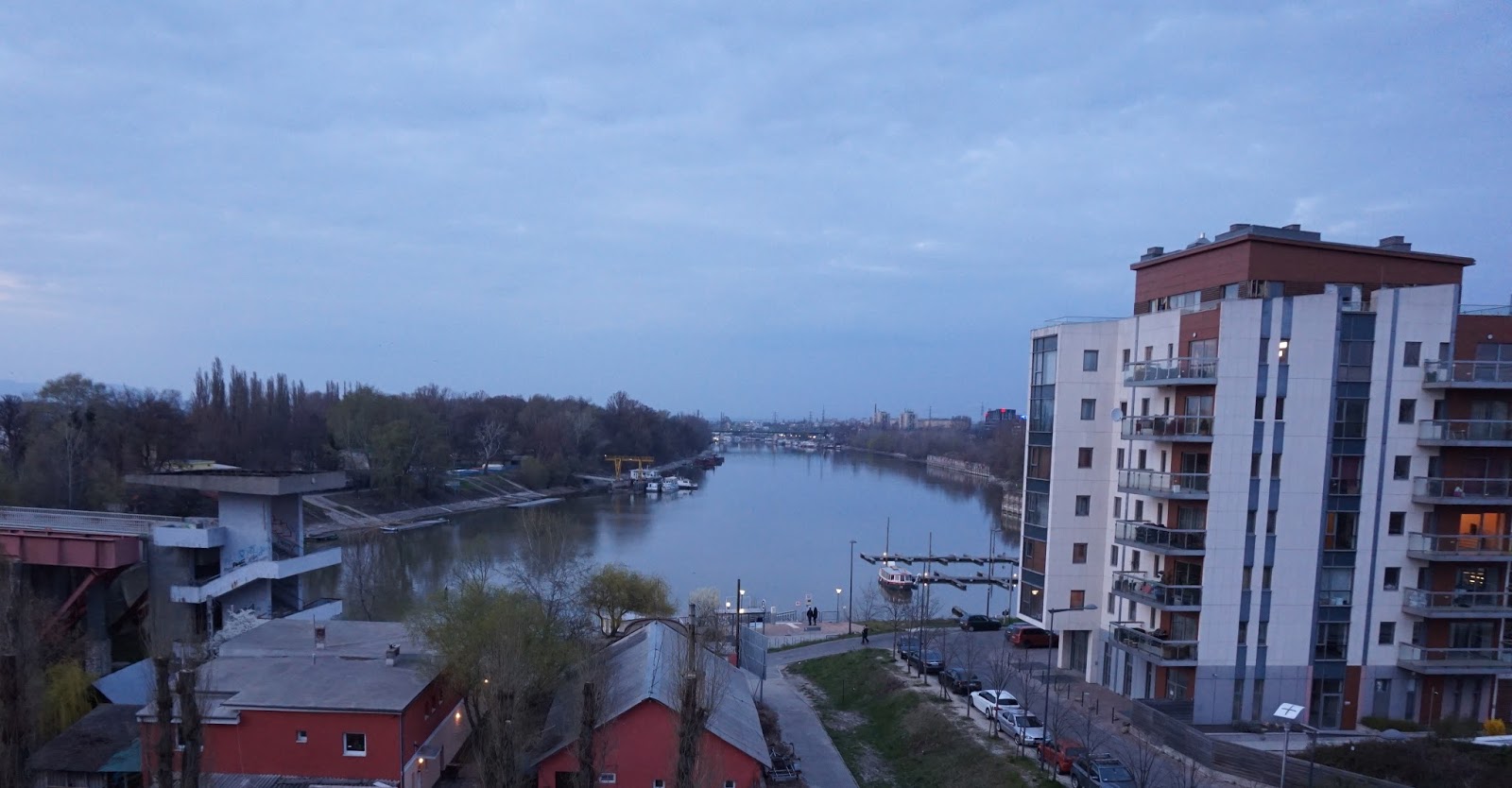 We bought a week travelcard in the airport at the travel information desk for around £12 each. Brilliant value when that price just about gets you a day of travel in London!
Single journeys are about 50p over there but with these longer duration passes, it also meant we didn’t have to validate our tickets or “punch in”, instead we could just flash them to the inspectors at each station entrance. 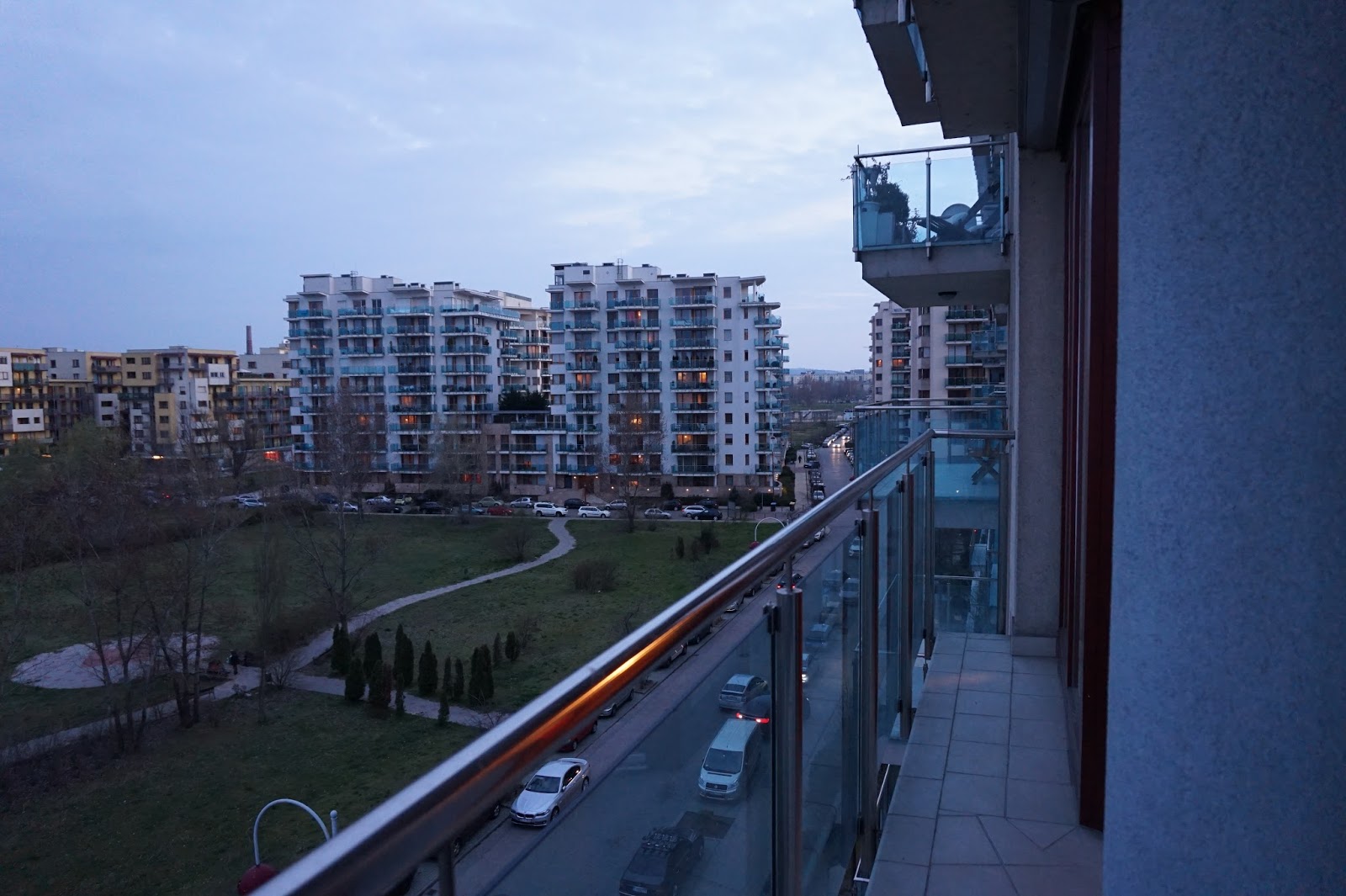 Our apartment was quite far out but really easy to find, we were on the Blue Metro Line (Line 3) and the station was called Gyöngyösi utca (we never did work out how to pronounce it).

We were right beside a huge shopping centre but due to our packed itinerary of things to do,  this didn’t make the agenda. The views of the River Danube from our apartment were simply stunning and we felt very secure with everything we needed in the flat.

You can also read some handy tips for finding accommodation in Budapest on the Stag Kiss Budapest website.

We spent the first evening finding our way through the centre of town and admiring some of the sights including the St. Stephen’s Basilica (Szent Istvan Bazilika) and the (Széchenyi) Chain Bridge by night.

St. Stephen’s Basilica by night with restaurants leading up to it

We’d heard about the free walking tours in Budapest and other European cities and the next morning we made our way to Vorosmarty Square (on the Yellow Line one stop from Deák Ferenc square) to meet with the tour guides.

We met with the Budapest Free Walking Tours and decided to also buy tickets for a Giraffe hop-on and off tour bus (including the riverboat to Margaret Island) while we waited for the walking tour to start. They have quite a few tours meet here and the main language is English but many other companies offer tours in other languages if needed. There are also a number of bus tours, most offering a similar experience so you can shop around before buying the first one you see.

Vorosmarty Square is quite a vibrant part of central Budapest and as you walk around you’ll see lots of designer shops as well as places to eat.  As it was the week of Easter, there was also a market in the square with great smelling food and drink as well as hand made gifts.

Deak Square is much more spread out with supermarkets,  restaurants and bars. It has streets leading to the river and the nightlife as well as the long road, Andrássy Avenue (echoing Paris’ Champs-Élysées) that leads up to Heroes’ Square (Hősök tere). The Yellow Line basically follows the road straight up to Heroes’ Square but it’s a nice, slightly long, walk up there.

You can also find the House of Terror Museum on Andrássy Avenue. I won’t say too much but it is a real insight into the history of Hungary and how it suffered through fascism and communism just in the 20th Century. I’m no historian but I learnt a lot about how the country suffered from the information sheets and video screens in each room (in Hungarian and English). Hungary only had it’s first free elections in 1990!

Like the Anne Frank Museum in Amsterdam, it is a really emotional experience, and also be prepared for a long (totally worth waiting for) queue. We went quite late in the day but I think they’re open until 6pm every day, except Monday when most museums and attractions in Budapest are closed.

The Hungarian State Opera House is also on this road. We had to pop in to have a look after Liv’s background at the Royal Opera House in Covent Garden. We’ve also been to Opera Houses in Norway, Amsterdam and Paris, so it was another to tick off the list.

Margaret Island (Margit sziget) was another personal highlight. It’s an island only 1.6 miles long in the middle of the River Danube and our bus tour included a boat to the island. As it’s linked to the mainland by a bridge, you can also get there by tram, bus or on foot. There’s food, gardens, a water tower and a sports pool on the island so it’s worth a quick trip and you can hire bikes or roller blades to see the sights.

The Hungarian Parliament Building sits on the edge of the river and we were able to get a tour with an EU discount just by showing our ID (hopefully we still get this if we return in future). The building is really grand and you even get to see the soldiers protecting the Hungarian Crown Jewels. Beware, no photos are allowed in this area of the building.

We passed the Basilica pretty much every day but on our last day we decided to venture in. There’s a donation tin to go in and see the grand space and supposedly where St Stephen’s right hand is mummified. But you can also pay around £1.50 to go up to the top of the Panorama tower to get great 360 degree views of the city.

If you want an even higher view over the city, go right to the top of Gellert Hill. It’s very touristy but well worth the trip. Buda Castle also offers good river views and can be reached by a short walk or by taking the funicular railway up the side of the hill.

We didn’t get to use a spa because we ran out of time but apparently they’re very affordable and a great experience. We saw the Rudas Baths as we walked down Gellert Hill – they have a rooftop thermal pool and views over the River Danube which looked really cool.

Hummus – We went to two of the Hummus Bar chains. They do a choice of accompaniments with the hummus such as meat, falafel and vegetables. They also offer sides like rice, chips or salad.You feel like a hipster but at the low price (food and beer under £7 if I remember correctly) to eat great food with a nice warm pitta, you really can’t go wrong. We went to the one on Kiraly Street and also the larger one on October 6th Street, just round the corner from the Basilica.

Mazel Tov – Recommended to me by a friend,  we actually ended up eating here twice. It happens to be part of the same chain and does great cocktails. On our first visit we were treated to some live music and on our second, there was a group doing an art class in a side room.

La Trattoria – Located on October 6th Street. A really great Italian that also serves traditional Hungarian dishes. I had proper Hungarian Goulash (soup style with the national spice Paprika) although the waitress had a little trouble understanding what dumplings were from my explanation and my phrasebook translation. They also served pizza by the slice.

Ez Az Bistro  – In the shadow of the Basilica, where we ate on our first night – they were showing football and I ordered the steak; what more could I ask for! At the end of the meal they gave us a free shot of traditional Hungarian fruit Brandy called Pálinka. Hungarian standards dictate that it must be at least 37.5% alcohol so definitely worth getting one of these if visiting.

Boscolo Hotel – Home to the New York Cafe and considered one of the most beautiful cafes in the world. It has been open since 1894 and has a lot of that old world feel. It was one of the priciest places we visited during the trip but also was one of the best hot chocolates I’ve ever had in my life, with a free biscuit. Ice creams and other desserts we saw on offer also looked great.

Trofea Grill – An all you can eat buffet that we didn’t get to try but comes highly recommended. Food is meant to be a lot better than standard buffets and you can get it all with unlimited drink for fairly cheap (around £8-£12 gets you get unlimited food and champagne, wine, beer and soft drinks).

Comme Chez Soi – A restaurant on my list that is ranked number one of all restaurants in the city. It is affordable and apparently great portion sizes but also very small with about eight tables so you need to book weeks in advance (usually before you get to Budapest)! We didn’t manage to get a table here, but the staff were great and recommended alternative restaurants.

Soul Food – An American-Caribbean place we passed that looked quite cool, but knowing I can find most of the things on their menu in England, we opted to go elsewhere.

Tipping in Budapest is around 10% of the total for good customer service. Some places already include a 12.5% service charge (“szervízdíj” in Hungarian) on your bill where you don’t need to leave extra on top. You either put tips into a jar by the till or hand directly to your server, but if you say thankyou when you hand it to them, they sometimes take it to mean keep the change. Keep this in mind if you are expecting money back.

Finding the Paprika flavour Pom-Bears in a supermarket was also an unexpected treat. I tried them in Croatia last year at Hideout Festival and have been hooked ever since, but they only sell them in certain countries. You will be in my good books if you ever bring me back a packet.

Around the centre of town and in some Metro stations they sell (very cheap) tube-shaped rolls of dough called Kürtőskalács or chimney cake. I recommend the cinnamon one but they have loads of other sweet flavours.

On our last night we went to a trendy bar called Platz by the Basilica for dessert and cocktails and happened to be next to the filming for what I think was the Hungarian TOWIE. I’m hoping they didn’t get us in shot but it was an odd experience seeing a staged argument between Hungarian twenty-somethings repeated over and over.

Overall, Budapest is a great city and I’d recommend a visit to anyone!

Check out more Budapest things to do here.