Last month I took a week off work and travelled to Spain with my girlfriend to volunteer at a dog shelter called Scooby Medina. We landed in Madrid after a 6am flight from Luton Airport and went on a two-hour long drive to a small town called Medina del Campo near Valladolid.

It is an area steeped in history and tradition. One of these traditions is hunting or coursing with dogs known as Galgos (Spanish Greyhounds) and when these dogs are no longer deemed good enough at what they were bred to do, they are neglected, mistreated, or abandoned on the streets and left to fend for themselves. If they are lucky enough, some of these dogs are brought in to Scooby by their owners (albeit a small minority).

Until recently they were traditionally hanged in the local pine groves.  Good dogs were hanged high for a quick death and dogs considered to be poor hunting dogs were hanged low to suffer a slow death. Thanks to Scooby’s work, the hangings have virtually ceased – although, very rarely, corpses are occasionally still found.

This is not just an issue in Medina but across Spain and also in other countries like Portugal and elsewhere in the world. Bull fighting is also another horrific Spanish tradition and one that petitions are trying to stop.

Scooby was to be our base for the week with other volunteers and my girlfriend’s cousin, Lucinda Read. As well as being the co-founder of British charity Greyhound Compassion (who support Scooby), Lucinda was our driver and guide for the trip.

Scooby (Sociedad Protectora de Animales y Medioambiente) was established in 1987 at a much smaller site by a man called Fermín Pérez. It was just one building and took lots of campaigning and fundraising to grow to what it is now. At the current site there is an on-site hospital where student vets volunteer, a recovery room for those animals who have just had surgery, a cleaning / washing area for the dogs and a large number of paddocks where the dogs can exercise, play, eat and sleep. Scooby also has sites in Laguna de Duero and Zamora in Spain.

There is also a quarantine area for the dogs who have been chosen to go to homes – they wait here before the transport vans arrive to take them to destinations across Europe. Scooby has a team of staff as well as volunteers like us and they are always in need of more people coming over to help out.

As well as Galgos there are also Podencos (Spanish hunting dogs), Greyhounds and many other breeds of stray dogs and cats. When we were volunteering there were only a few felines left and considerably less than the hundreds that were there last year. The shelter also provides food, beds and shelter for the local strays that visit. There were also chickens, rabbits and ferrets living in some of the protected areas of Scooby.

I was never the biggest fan of cats after a run-in with one as a child (who I’m convinced was possessed by the devil), but after seeing these gentle creatures it is hard to believe that someone like the Croydon Cat Killer is still at large in London.

If dogs had thumbs, they would probably be adept at picking up their own mess, but as they don’t, one of our main duties was mucking out their paddocks and cleaning their sleeping areas. This involved a scoop and bucket, plus lots of lifting and carrying. We were also able to spot any injured dogs and alert them to the vet while we were in their paddocks, as well as having a bit of play and cuddle time.

I must say I’ve never seen so many different consistencies and colours of dog mess in my life – I joked about needing a colour swatch for it all but it definitely made a change from sitting at my desk in front of a computer for a week.

There were also many other jobs that needed doing on a regular basis; blankets and medical sheets needed sorting and washing, water needed changing and food needed to be prepared. The dogs were mainly fed bread mixed with donated food from bakeries and local people.

We brought a lot of quick snacks with us but were also able to get some bread and other food from the supermarkets in the town centre. Medina had both an Aldi and a Lidl, so it was far from a deserted little village. However, it was the sort of place where an inter-racial relationship was a rarity or quite possibly something unique that locals had rarely (or never) seen before. We were able to get a nice meal in the evenings with the other volunteers, however, due to the Spanish way of life, most restaurants weren’t cooking until 9pm at the earliest.

We’d start work again at around 9am each day. On our second day we found that the bedding store had been piled up with sheets and towels by previous volunteers. Some of it was damp when it was put away and so was in dire need of sorting. The room (about the size of two car garages) was piled almost floor to ceiling and we had to sort through all items including about a million dog coats  and divide them into piles of things to throw away, useable things for the shelter and items that could be sold in the Scooby charity shop.

While we were there, we helped out in the on-site Scooby charity shop as well as helping Ellie, a fellow volunteer, to transform a stationary shop (that seemed to have enough compasses and protractors to stock a whole country of schools, as well as some questionable adult magazines…) in Medina town centre into a second Scooby charity shop.

My personal highlight was Fermín taking us on a tour of the larger grounds of Scooby Medina. As well as the animals in the paddocks, there are a large number of farm animals kept in the expansive fields behind. There were sheep, goats, pigs, ducks, geese and horses (one of which bit my arm after I took a sneaky selfie).  There were a few donkeys too with crosses on their backs, which are said to be the same Donkeys that took Jesus to Jerusalem on Palm Sunday. There was even an Indian Bull! All are closely guarded by big Spanish Mastiffs.

These animals were saved from Zoos, Circuses, slaughterhouses and gypsies/travellers in Spain and other European countries where they were either being mistreated or set to be killed. A number of them are also subject to ongoing court cases over their mistreatment.

Many people want to be dog owners but a large number buy dogs from places like Gumtree or from puppy farms (disguised as professional breeders) where dogs are mistreated, kept in terrible conditions and sold for extortionate amounts. I was never a massive animal activist, but seeing dogs and other animals desperately needing homes really shows you that adoption is the answer to owning pets. It is a way of saving lives rather than creating many more lives, which people use to profit from.

We promised we wouldn’t get attached to any of the dogs, but there was one placid and cute Podenco which my girlfriend fell in love with and named Lily. We really wanted to bring her back to live with us in the UK but working full-time and not having a garden flat makes it difficult for us to have a dog. We live in hope.

It was hard saying goodbye to Scooby, but I’m sure it will be somewhere we’ll regularly visit and definitely never forget.

To donate to Scooby, volunteer or look for dogs available for adoption, please visit the website here: http://www.scoobymedina.org/ 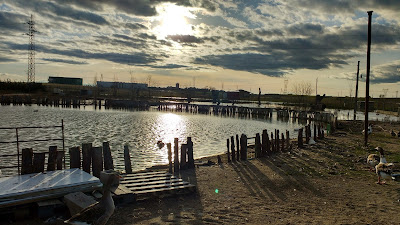